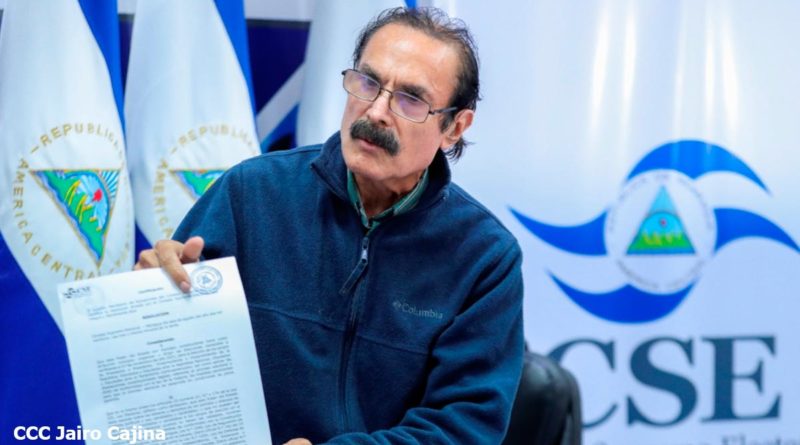 Supreme Electoral Council – Managua on the sixth day of August twenty twenty one. Three thirty in the afternoon.

That this Power of State by constitutional mandate has the attributes of calling, organizing and directing the General Elections to be verified on November 7th of the year 2021 for the election of the posts of President; Vice President; Deputies to the National Assembly; Deputies to the Central American Parliament; as well as to apply the legal constitutional dispositions relating to the electoral process and to issue in accordance with the relevant law the pertinent measures such that the electoral process is carried out under fully guaranteed conditions.

That in the same way that the articles 10 sub paragraph 21; 7 and 174 of the Electoral Law 331, indicate as an attribute that this Power of State should define the duties and rights of the parties and political party alliances and their candidates; and that no person can be registered as a candidate to the posts due for election in this electoral process who does not fulfill the necessary qualities, or who may have impediments or may be prohibited in accordance with the Political Constitution of the Republic of Nicaragua, with the Law Regulating Foreign Agents No. 1040  published in the Official Daily Gazette No. 192 on October 19th of the year 2020: likewise the Law for the Defense of the Right of the People to Independence, Sovereignty and Self-Determination for Peace No. 1055, published in the Official Daily Gazette No. 237 on December 22nd of the year 2020 which in its first article states not to register as candidates, Nicaraguans who lead or finance a coup d’etat or an attempted coup d’etat, who disturb the constitutional order, who foment or instigate terrorist actions, or who carry out actions that undermine the independence, sovereignty and self-determination, who encourage foreign interference in internal affairs, who call for military intervention, who organize with foreign funding to carry out acts of terrorism and destabilization, who propose and campaign for economic, commercial and financial blockade against the country and its institutions, as well as those who call for, praise and applaud the imposition of sanctions against the Nicaraguan State and its citizens and all those who damage the supreme interests of the nation as set out in the legal order.

That in accordance with the Law for the Sovereign Security of the Republic of Nicaragua No. 919 which establishes that it is the responsibility of the State to ensure its purposes as indicated in article 4, sub paragraph 1 Contributing to the consolidation of peace, freedom, democracy and development, guaranteeing to all inhabitants the conditions of security enabling them to take part in and benefit from national strategies of sustainable human development making possible economic growth with equality. And sub paragraph 2 Guaranteeing the existence of governments elected by universal, equal, direct, free, secret and transparent suffrage, sustained by reinforcement of the civil power, political pluralism, economic freedom and overcoming poverty and extreme poverty.

That, in accordance with the condition referring to the social attribute of NON repetition contained in article 3 of the Amnesty Law No. 996 published in Gazette No. 108 on October 10th of the year two thousand and nineteen which states that any citizen who benefited from the Amnesty Law shoud abstain from perpetrating new deeds that lead to repetition of the behavior causing the offense.

That this authority has received denunciations from the legal representative of the Constitutional Liberal Party PLC in which they show that the Party Political organization Citizens for Liberty, CxL has acted in flagrant violation of the Law for the Defense of the Right of the People to Independence, Sovereignty and Self-Determination for Peace No. 1055 and in particular in relation to its legal representative the citizen Carmella María Rogers Amburn when she carried out the process for her citizen identity document that she did so in a fraudulent, anomalous way for which reason this Power of State out of regard for the Constitutional disposition of due process ordered the General Directorate for Attention to Political Parties to carry out the corresponding administrative process and based on its results to determine what the electoral law disposes.

That this Supreme Electoral Council has learned based on information from the General Directorate for Attention to Political Parties in relation to the report carried out on the political organization Citizens for Liberty, and too on its legal representative  Carmella María Rogers Amburn in which the General Directorate of Citizen Documentation confirmed that in the administrative process to acquire her Nicaraguan identity document she used irregular procedures by providing documents that identify her as Carmella Marie Kitty Monterrey; for which reason in accordance with article 38 sub paragraph ‘e’ of the Law on Citizen Identification No.152, this fact constitutes cause to cancel her identity document.

That at the same time the General Directorate for Attention to Political Parties, as a result of technical investigations carried out by that office, proved that the Political Party organization Citizens for Liberty has demonstrated behavior in breach of the legal conditions and technical regulations covering this class of political organization, especially for having repeatedly verbally undermined the country’s independence, sovereignty and self-determination; which after consideration it deems merits the cancellation of its legal personality.

The Supreme Electoral Council, using the attributes conferred upon it by article 173 of the Political Constitution of the Republic; articles 10; 67; 174 of the Electoral Law no. 331; the Law on the Republic of Nicaragua’s Sovereign Security No. 919; The Amnesty Law No. 996; the Law Regulating Foreign Agents No. 1040;  the Law for the Defense of the Right of the People to Independence, Sovereignty and Self-Determination for Peace No. 1055, and in compliance with the agreements issued by this authority on May seventeenth and June third respectively of this year both referring to the obligations to be complied with by political organizations participating in the electoral process “General Elections 2021” and contained in the legal dispositions mentioned above, Resolves, FIRST: To cancel the citizen identity document in the name of Carmella María Rogers Amburn, and instructs the General Directorate of Citizen Documentation  to carry out the corresponding administrative procedures to make the cancellation effective. – SECOND.-  To cancel the legal personality of the Political Party Citizens for Liberty CxL. Instructing the General Directorate for Attention to Political Parties to proceed with the corresponding administrative processes to make the cancellation effective. Let this be be Notified for all effects of the law.- (signed) Brenda Isabel Rocha Chacón, President Magistrate; (signed) Cairo Melvin Amador, Vice President Magistrate; (signed) Lumberto Campbell Hooker, Magistrate; (signed) Mayra Antonia Salinas Uriarte, Magistrate; (signed) Alma Nubia Baltodano Marcenaro, Magistrate; (signed) Devoney Johaira McDavis Álvarez, Magistrate;  (signed) Leonzo Knight Julian, Magistrate.- Before me (signed) Luis Alfonso Luna Raudez, Secretary of Actions”.-

This copy is in accordance with the original against which it was duly checked. – Managua sixth of August of the year twenty twenty one. 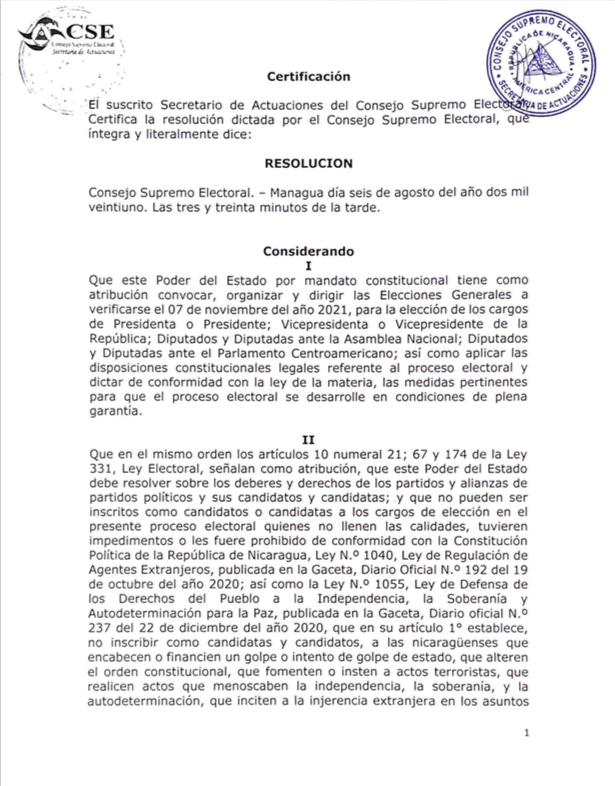 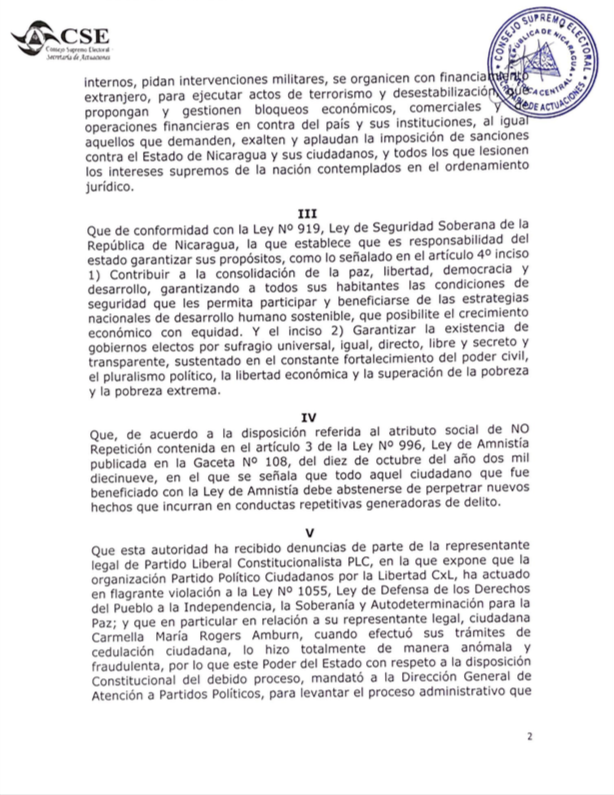 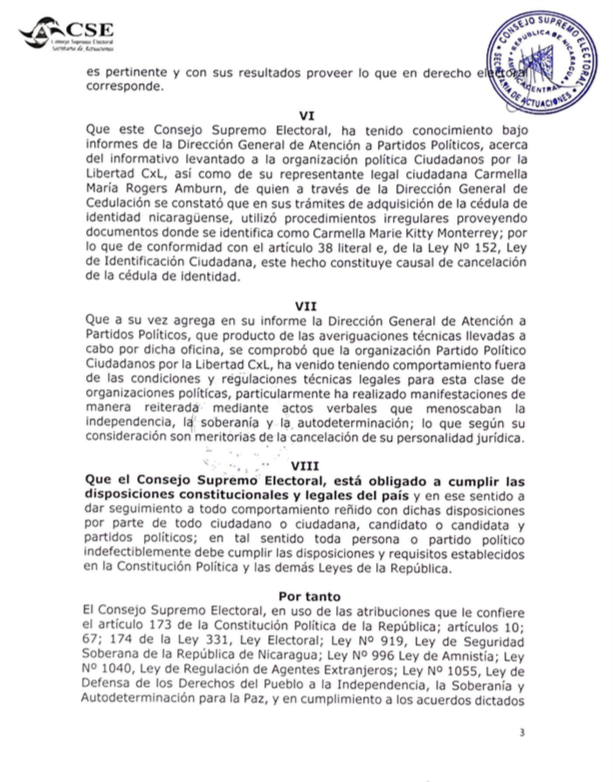 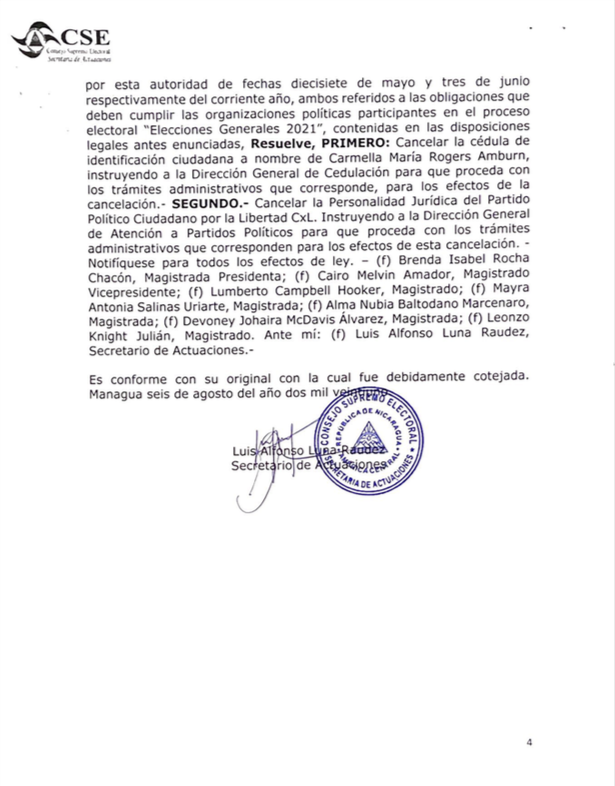 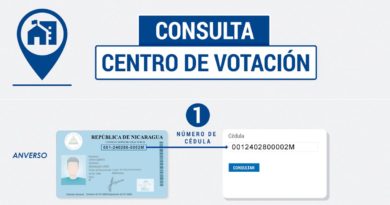 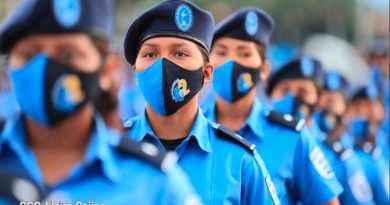 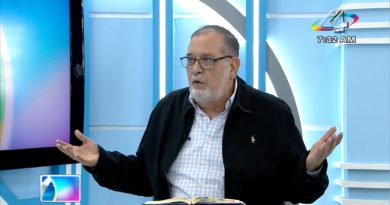