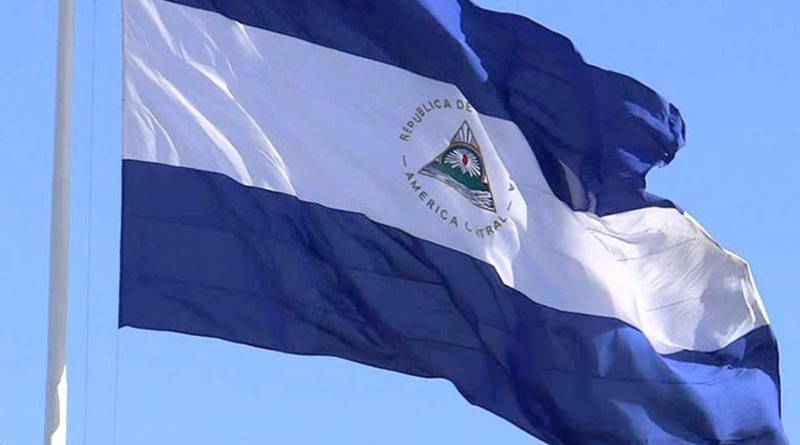 Government of Reconciliation and National Unity

PRESS RELEASE
NICARAGUA IN THE HAGUE

On 19th November, 2012, the International Court of Justice issued a Ruling delimiting the Exclusive Economic Zone of Nicaragua in the Caribbean Sea, up to 200 nautical miles from the baselines of the Nicaraguan coasts. Colombia refused to comply with this ruling from the very day it was issued and subsequently denounced the Pact of Bogotá, in an attempt to prevent Nicaragua from returning to Court, to denounce the violations of Nicaraguan sovereign rights and maritime spaces in the Caribbean Sea.

Faced with this situation, and before the denunciation of the Pact of Bogotá had entered into effect, the Government of Nicaragua presented its claim against Colombia before the International Court of Justice, on 26th November, 2013, requesting that the Court declare the violations committed by Colombia of the maritime spaces of Nicaragua, as recognized by the Court’s ruling of 19th November 2012.

In 2014, Colombia presented preliminary objections to the jurisdiction of the Court and requested that the High Court of the United Nations declare its incapacity to hear the claim filed by Nicaragua in its entirety. The Court rejected Colombia’s preliminary objections and announced its jurisdiction to hear the case; based upon which, Colombia also presented 4 counterclaims. The Court considered two of the counterclaims to be inadmissible, and gave way to another two, to be considered within the deliberation process. The first counter-claim addresses alleged violations of the historical fishing rights of the Raizal population of the Archipelago of San Andrés and Providence, and the second; alleged violations of international law in relation to the straight baselines drawn by Nicaragua. Public oral hearings on the merits of the matter were held on September 2021.

Today, the International Court of Justice has issued a firm, final and mandatory judgment in which it agrees with Nicaragua, by confirming that Colombia implemented a State policy that has violated the jurisdiction and sovereign rights of Nicaragua by:

The International Court of Justice has ordered Colombia to cease its illegal conduct in all the aforementioned aspects and to reform its legislation in accordance with customary international law, in particular the provisions of Presidential Decree 1946 and its amendments, in such a manner that they do not cover areas belonging to Nicaragua or provide faculties that are incompatible with international law.

The ruling has made it explicitly clear that Nicaragua is the sovereign state that issues fishing permits, as well as any other permit for exploration and exploitation of resources in its areas, as well as to conserve the marine environment of its entire exclusive economic zone, among others, in accordance with international law, the Cartagena Convention and the Protocol related to specially protected areas and wild flora and fauna. In this sense, it is confirmed that the Nicaraguan Caribbean Biosphere Reserve, created in 2021, is within the jurisdictional areas of Nicaragua, in accordance with international standards.

Finally, Nicaragua will take the necessary steps to adjust its legislation with respect to its straight baselines on the Caribbean Sea, so that they can fully comply with the recommendations of the High Court.

The Government of Reconciliation and National Unity reaffirms its steadfast commitment to the rule of law at the international level and the peaceful settlement of disputes between states. In particular, Nicaragua wishes to point out that our recourse to the highest Court of Justice, and Nicaragua’s repeated presence before said Court since 1984, is a palpable sign of that commitment. 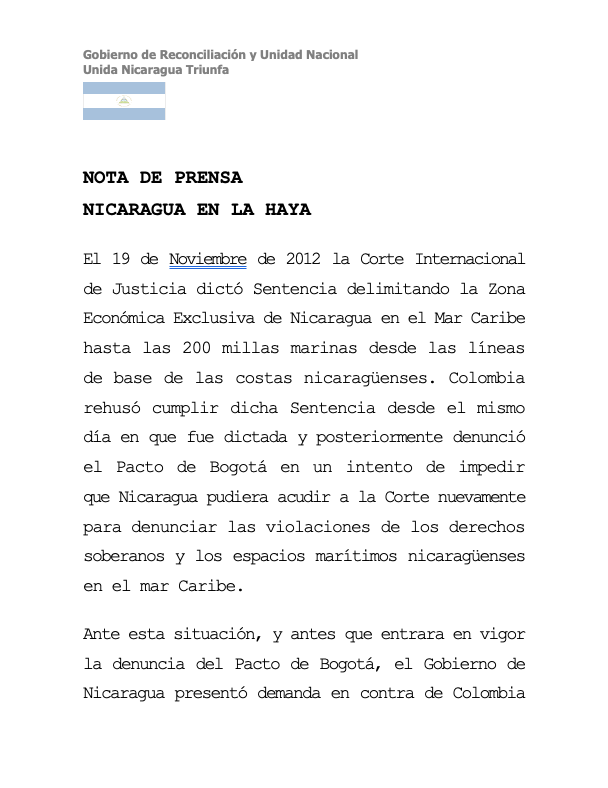 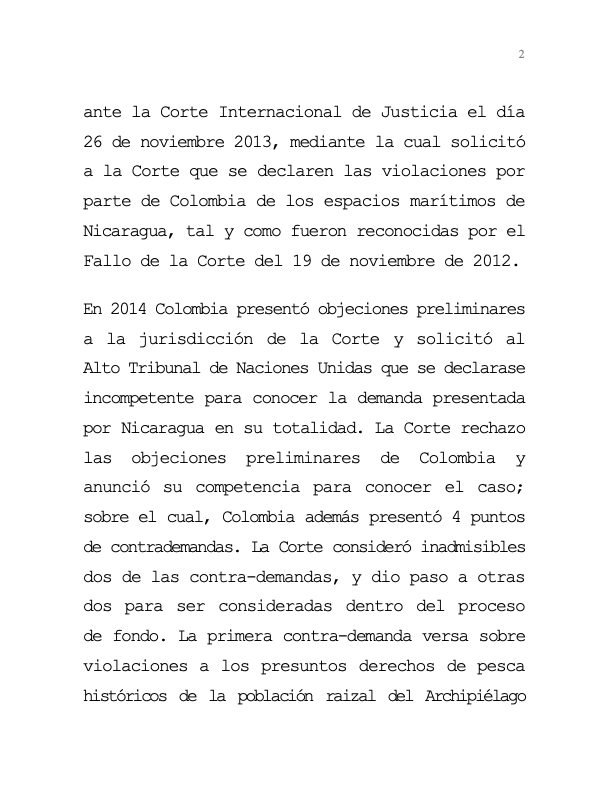 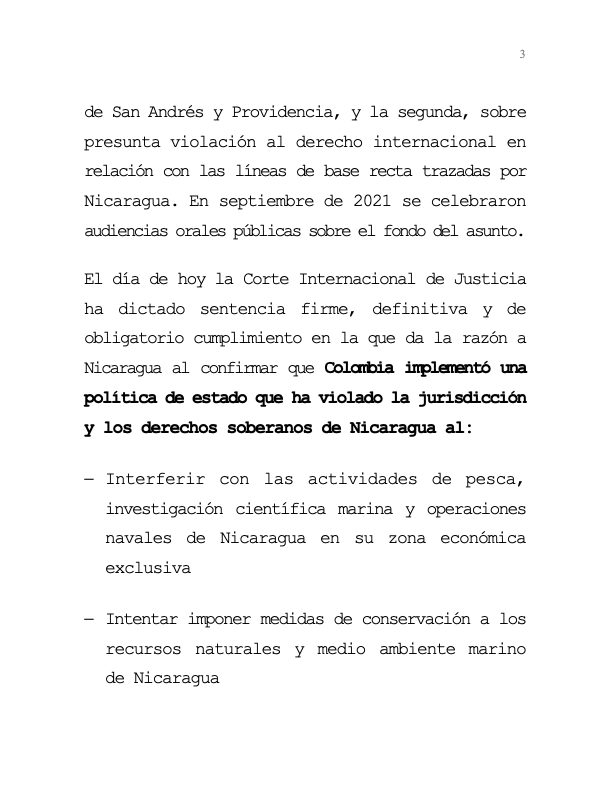 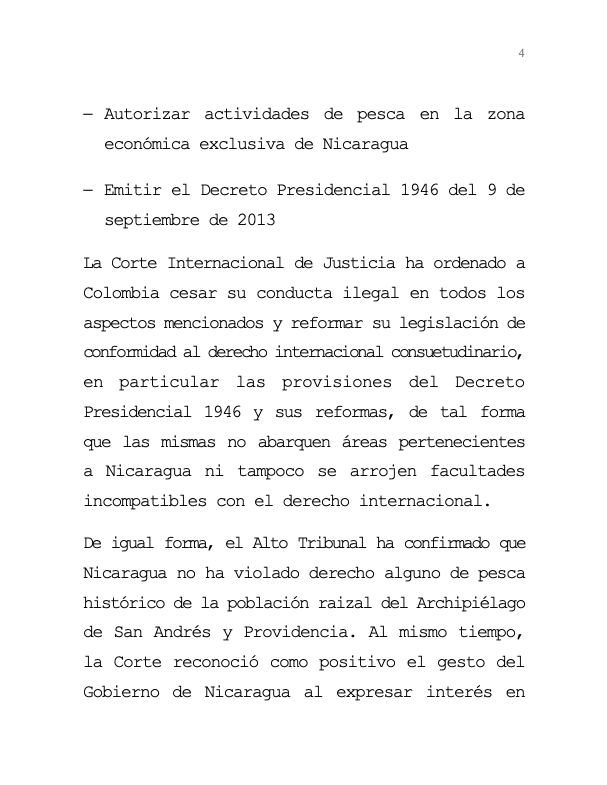 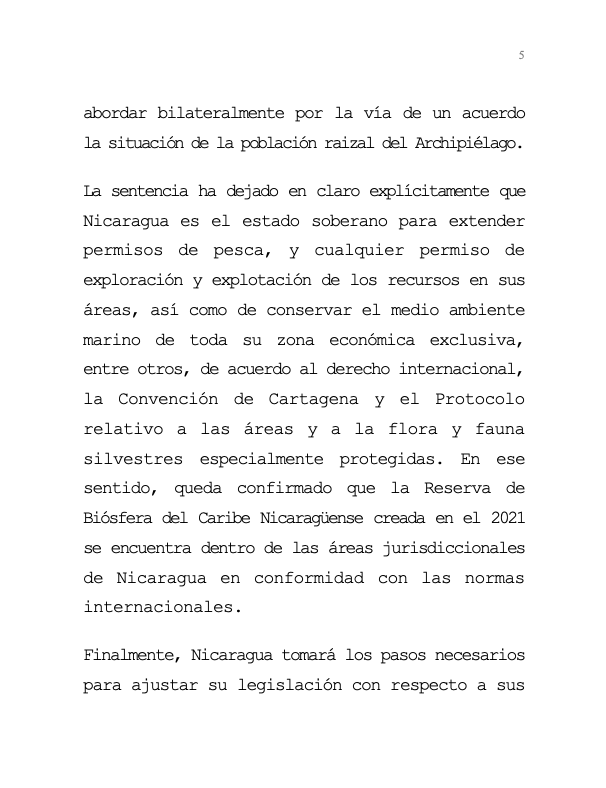 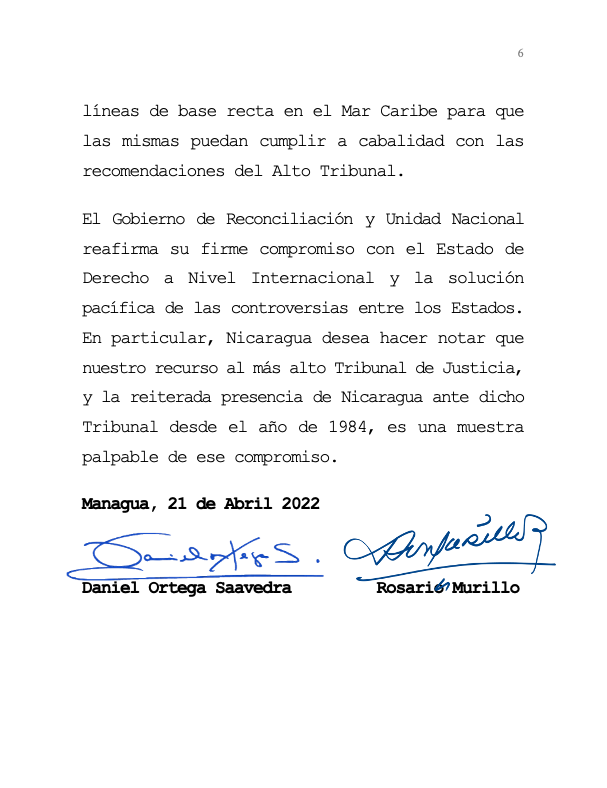 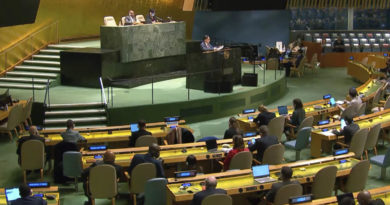 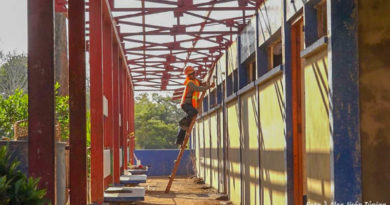